Buchobjekte (Book Objects) turn up in Cornelia Konrads work between 2002 and 2006. Their small format and their intimate character, which is meant for their presentation in interior space, distinguish them from the artists large in situ works in public spaces. The Book Objects nevertheless take up a central place in her creative work. They smooth the way for understanding her artistic biography.

Konrads studied philosophy, German language and literature, and cultural studies, finding her way to an existence as a freelance artist relatively late. The ontology of the Book Objects conceals—or so it seems—an exorcistic act, with whose help Konrads drove out her academic way of thinking in order to awaken the creative forces of the unconscious, the dream-like and surreal, the faculties of intransigent and dissident thought.

We know about the power of language as an instrument of control, whose logic inscribes itself in the bodies and minds of those controlled by it. With her Book Objects, Konrads makes us aware of the syntagmatic character of language, but she does away with the semantic character of the control structures that produce meaning.

She liquidates them in an almost playful way. Be it that text and script consist solely of the additive accumulation of the short word “and,” which as a copula no longer creates clause constructions but merely connects itself with itself.

Or be it that in “Splitterbuch (Splitter Book)” she fixes and arranges pieces and fragments of twigs in such a way that their structure suggests associations with a system of language; however, she no longer wants to signify the resulting script, rather just let it be.

In “Blindbuch (Blind Book)” Konrads develops a kind of alphabet out of rose thorns, which figuratively reminds us that one must experience pain in order to see in love.

“The Staubbuch (Dust Book)”, too, negates the conservative character of the writing, and in a liturgy of repeating spirals it thematicizes what is left of us when life has come to an end.

The most radical act is one of exorcising the conventional system of writing in her “Brandbücher (Burn Books)”.

Whether by means of exploding caps, flaring sparklers or an attacking soldering iron—nothing reminiscent of conventional writing remains except a pronounced burn mark. Even if the creative chronology apparently gets muddled up in the process—sometimes a maturing phase is necessary before a manifesto can develop—the Book Objects are basically the mentally anticipated inaugural act for what Konrads creates as an artist. What becomes possible in the spellbinding character of the Book Objects is that which takes shape as the artist’s oeuvre in the period before and after their emergence.

“Intérieur en Passant” and “The Gate” demonstrate that the artist not only incorporates natural dimensions into her in situ works, but also historical dimensions. 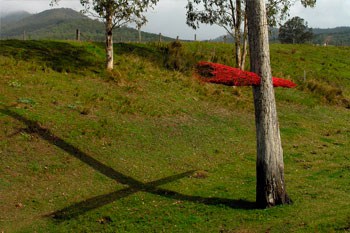 This is exemplified in particular in Konrads’ Land Art pieces created in Australia, which is not surprising when one considers that every square meter of the land is drenched with the historical narratives the billabong memory of the Aborigines. In “The Billabong Memory” (2005) Konrads pierced a tree standing in a dry creek bed with a bright red spear made of willow branches. The work gives the impression of being an archaic totem. A reminder that this place was once the scene of a crime against Aborigines—which the artist did not learn, by the way, until after she had created her sculpture.

The title of another work that Konrads also produced in Australia, “Dreamstone Lines” (2005), appears to be reminiscent of the songlines of the Aborigines, with which they survey their land. Its horizontal bamboo stems are arranged in such a way that their red tips bring out the perspective of a stone they are pointed toward. Like a vulva dentata they gently and aggressively embrace it much like in a ritual, which in its polarity at the same time provides information about what is being embraced.

The work “Floating Surface” (2005), which originated in Japan, is also characterized by significant painterly elements. The pile of tree trunks, alternating between bleeding red and light, intact cut edges, speaks discreetly metaphorical of wounding and healing of itself.

Konrads also produced another work in Japan, “Ascension” (2005). Held in form by steel ropes, in the midst of a cedar wood slender stalks of bamboo struggle in a fluid movement up the side of a mountain—skywards. Their ascent becomes symbolic in many ways, including for the transformation of nature in art. 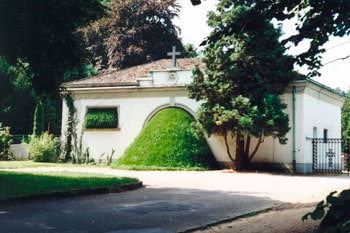 The harmony and opposition of nature and culture is also central for Cornelia Konrads’ intervention “Grass Works” (2002) in Dreieich. She has waves of grass bulge out of the windows and the entrance of a cemetery chapel. She both barricades the openings and entrances and resurrects them. This once again becomes highly symbolic in connection with the specific location of her artistic intervention.

It is not only in fact about the interrelation between opening and closing, but is also to be taken in a figurative sense. After the artistic intervention using the medium of fresh green grass,onda in connection with the cemetery chapel the transition from life to death becomes one from death to life. Konrads again makes sovereign use of the figure of inversion and sets—in reality and symbolically—a counterpoint of life to the oppressing reality of death. The inversion strategy also characterizes “Onda” (2006), a work produced in Italy in which an enormous wave consisting of dark branches breaks through the wall of a white house, gushing inside and outwards at the same time. The coloristic contrast is particularly appealing. The crisscross of branches gives the impression of thick, plaited hair. In this reading it metonymically represents the absent tenants of the former alpine pasture, to which the building belongs. 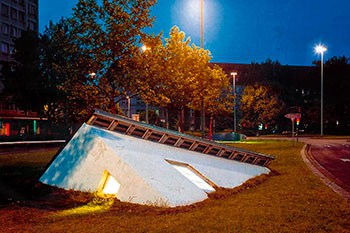 The examination and analysis of reality, the game with contradiction and ambivalence, the attitude of coming to terms with the way things are also characterize the piece with the cryptic title “Still Life” from 2004. We see a house on a narrow traffic island in downtown Essen, and we are not certain whether it is sinking into the earth or rising out of it. Passing or becoming? At night light shines out of the window and the door, half buried in the earth. So much is clear: there is still life in the house. Let us judge the nightly phenomenon of this impressive installation to be an act of resistance against the unmerciful law of decline. This resistance is not less heroic than Cornelia Konrads’ artistic revolt against a world spelled solely with measure and number.